RenewIT was part of a panel discussion at the two-day DataCloud 2016 event in Monaco on 8 and 9 June.

The panel session also included Tech UK, Green IT Amsterdam, Future Tech and others and looked at some of impediments and drivers for renewable energy adoption by datacenters.

As well as being involved in the panel, the project also met with numerous potential early adopters and partners including The Node Pole, Uptime Institute and others. 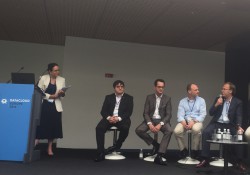